ISPmanager: What tools for web programmers are about to be released

My name is Yaroslav Zabagonski and I am the Product Owner of ISPmanager. Today I will tell you what improvements in ISPmanager will be helpful for web programmers. Some of them have already been made, others will be released this year. I also invite you to take part in the panel’s future - more about that at the end of the article.

We are adding tools to help you focus on website management instead of setting up the environment and administering it.

Many have already appreciated that ISPmanager provides a flexible PHP configuration - you can specify a different processing module version and mode for each website. There is no need to install packages through the console and no need to configure alternate versions manually.

In addition, support for Node.js came out recently. It was originally planned for July, but then we decided to release it early because users asked and actively voted for it in the roadmap. Many people use MongoDB — together with Node.js - we will add it to ISPmanager shortly. Persona Server - a high performance solution based on MySQL.

In the third quarter we will release Python and one of the most popular web development frameworks Django.

Several tools for continuous development will be released in ISPmanager. In Q3, we will add Git - users will be able to create local repositories, clone their projects from GitHub by selecting the required branch, and deploy them to workspaces.

Integration with Doсker. will also be released in Q3. The tool will help you quickly deploy new projects and scale them. The administrator will be able to add local and remote image storages and give users access to images.

Let me tell you about some more tools that have been recently released or are planned in the near future.

We have added Google's Page Speed modules for Apache and Nginx, which optimize the code and compress images.

Support for the OpenLiteSpeed Web server will be released on June 21. It is a super-fast and low-resource web server. Here areits test results on the developer's website versus Apache and Nginx. You can also find independent performance studies of OpenLiteSpeed on the web.

We are now redesigning the notification system mechanism. The result will be a special section in ISPmanager - Notification Center, with convenient systematization of messages and the ability to receive notifications via Telegram. Among other security tools, support forOpenVPN will be released in the third quarter. In Q4 – Web Application Firewall DDoS protection module. .

We have improved our panel development and testing processes. We switched from weekly to bi-weekly sprints so that we could check the code more thoroughly before release. Internal testing processes have been re-engineered. Now updates are consistently released every two weeks, and their quality is higher. The number of bugs in beta- and stable-releases has decreased.

At the end of the year, ISPmanager will come out with a dark theme. It is more convenient to work with at night: it is easier on your eyes and helps focus on the content. And also, it is plain beautiful.

How to apply updates

To make all new features available in the panel, you need to install updates. To do this, go to the ISPmanager 5 interface. 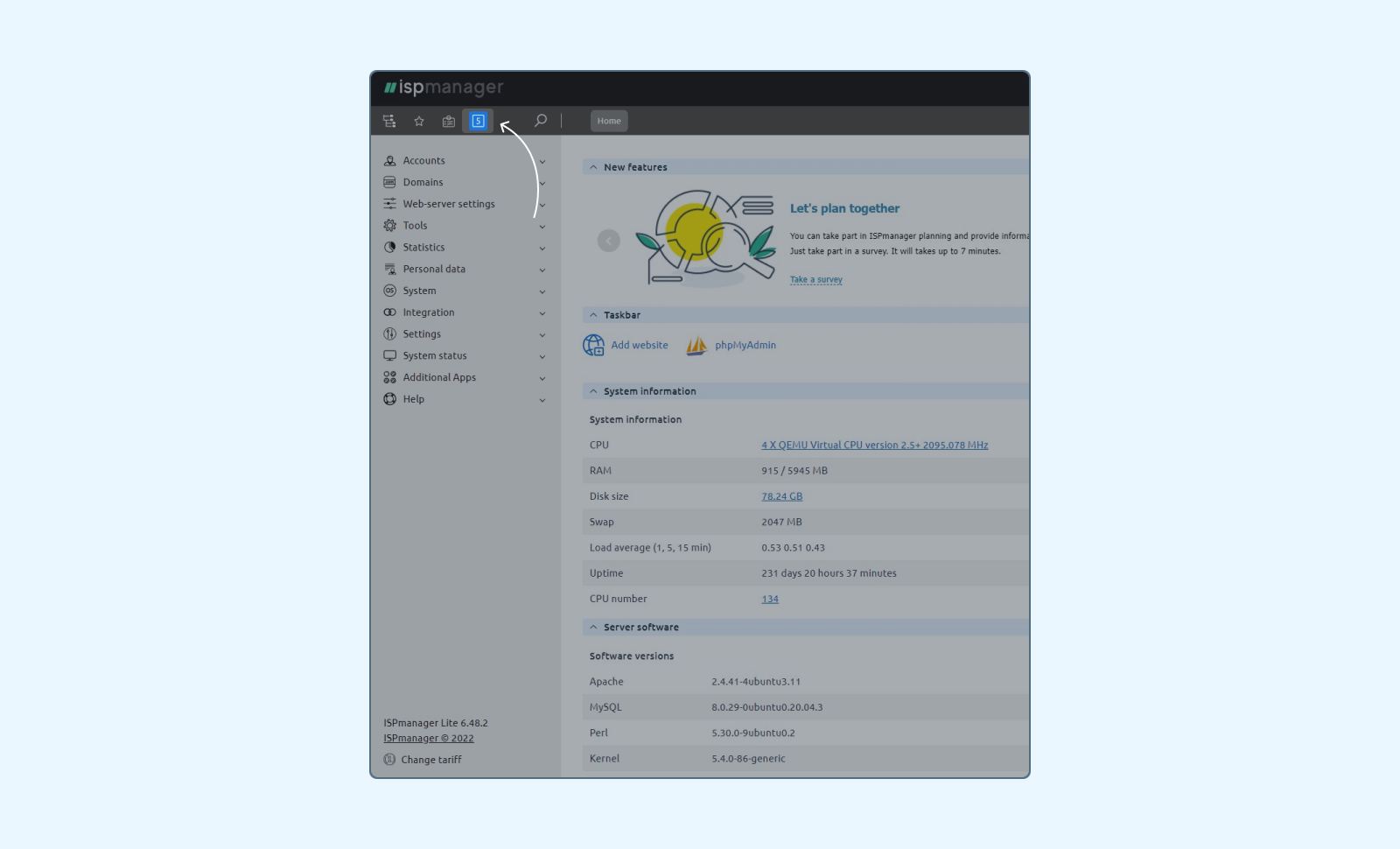 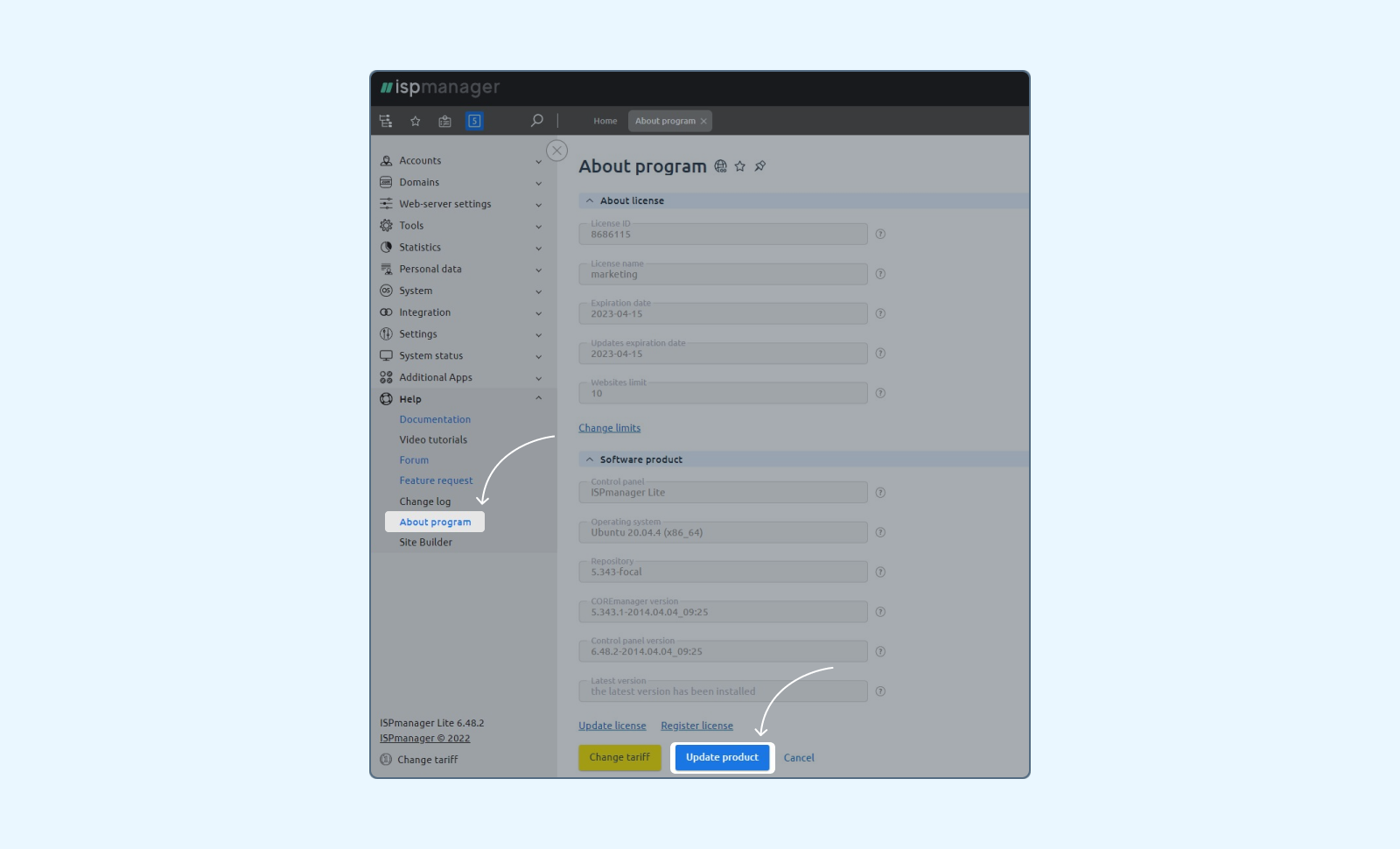 Change ISPmanager together with us

You can influence what updates will appear in ISPmanager in the future. Leave votes in the road map. We will add the most popular features to the panel.